Edgar later in the war flew with the RAF in Lancaster Bombers and has the distinction of having flown with two recipients of the Victoria Cross Medal as he also flew with Guy GIbson. 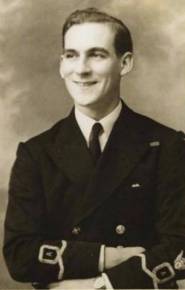 Leading Airman (TAG) Don Bunce. Don is depicted in the fine painting  by the acclaimed aviation artist 'Philip West' which, graphically illustrates him at his standing at his Vickers gun.

The British aircraft were approaching the main Luftwaffe fighter screen flying through layers of cloud and meeting the enemy at all levels. As as they broke up one wave of attacking aircraft another flight dived to attack the Swordfish. There were 20 or more Me109s circling to make a mass dive on the old biplanes when 3 of Kingcombes Spitfires attacked and scattered them. Suddenly all 10 Spitfires were lost in a whirling air battle with the Luftwaffe. As the Squadron Leader's courageous and experienced Spitfire pilots began fighting furiously, the Swordfish pilots sighted the German battle fleet. From just about sea level up to about 2,000 feet the whole sky swarmed with Luftwaffe fighters, the largest number ever to have covered any Naval Fleet of any nation up to that time. 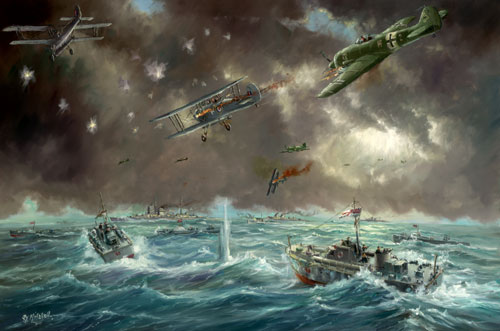 Onboard the Battle Cruiser Prinz Eugen the anti-aircraft gunnery officer, Cdr Schmalenbach, suddenly heard one of his lookouts shout: "Enemy planes at sea level" The Germans realised with a cold chill that here was their greatest danger of all - a suicide attack! When they were 2,000 yards away every flak gun in the German fleet from the 4 inch guns to the multi-barrelled guns manned by the German Marines, burst with flickering flame. With gold tracer shells and white stars of bursting flak around them, the Swordfish continued on unswervingly. Esmonde led his squadron over the destroyers while his TAG, PO Clinton, continually fired his machine gun at the diving Luftwaffe planes. Tracers fromthe destroyers and E-boats smacked into the cockpit as some FW190s now joined the attack. They dived onto the Swordfish and their cannon shells tore big holes in the fuselage and wing fabric. It was a miracle that they kept flying. Tracers set fire to Lt Cdr Esmonde's tailplane. Spitfire pilot Flt Lt Michael Crombie reported with the raging all around he was aghast to see a crew member (PO Clinton) climb out of his cockpit and crawl along the back of the fuselage to the tail wher he beat out the flames with his hands! By the time that 'Clints' Clinton had eased himself back to his cockpit they were over the outer screen of the flak ships and the German Battleships' main 11 inch guns came into action. Belching smoke and flame they laid down a barrage that sent spray splashing into the low flying and now limping aircraft. One shell burst right in front of the CO and it shot away his lower port wing. His Swordfish shuddered and dipped but Esmonde kept it flying. With blood pouring from wounds in his head and back Lt Cdr Esmonde hung onto the controls, holding his course steady for the Prinz Eugen. In the rear cockpit lay PO Clinton and the Observer Lt Williams, both killed in the last attack by a Focke-Wolf Fw 190.

In a last desperate effort he pulled the Swordfish's nose up and released his torpedo just before a direct hit blew the Swordfish to pieces in a red flash. As pieces crashed into the sea lookouts on the Prinz Eugen reported the torpedo track, Captain Brinkmann ordered "Port 15", and the ship turned easily to avoid the torpedo. Aboard the German Battleships all this heroism by the Swordfish crews produced no sense of danger whatever, but certainly a feeling of compassion for the fliers sacrificing themselves against impossible odds. Admiral Ciliax, watching from the Scharnhorst Bridge, the Swordfishlumbering towards her, remarked to Captain Hoffmann: "The British are now throwing their mothball Navy at us. Those Swordfish are doing well to get their torpedos away". While all 3 ships steamed full speed ahead, firing everything they had, the torpedo planes continued flying straight towards them, just skimmimg the waves.

The Swordfish immediately behind the leader followed in to attack and the Observer, 20 year old Sub Lt Edgar Lee, saw the CO crash into the sea. The Pilot, Sub Lt Brian Rose, tried to keep a steady course and when Edgar Lee had a clear sighting seeing the ships stand out under the clouds, he tried to give instructions through the Gosport Speaking Tube, shouting: "Now, Brian, now!" Unaware that the speaking tube had been severed by gunfire and that his instructions were not being heard. Brian Rose, wounded in the back by cannon shell splinters, held onto the controls, whilst Edgar Lee was too busy shouting directions to notice that the torpedo had been released. At the same time Brian was wounded the main petrol tank was hit. Fortunately it did not catch fire but fuel starvation made the engine splutter. Brian switched over to the 12 gallon emergency gravity tank which would allow them another 10 to 12 minutes flying time.

As they were losing height, Brian tried to pass round the stern of the Gneisenau but flew right as they swerved away from the barrage of anti-aircraft fire, Edgar Lee turned and saw TAG 'Ginger' Johnson slumped over his gun. He had been mortally wounded when that cannon shell had hit them.

Brian kept control of the plane and managed to bring it down on the ice cold sea about half a mile from the Prinz Eugen. Edgar managed to get Brian out of the aircraft and into the yellow dinghy he had released just as the battered Swordfish sank taking the body of Leading AIrman Johnson with it as he was still attached by his G-Strap.

The third Swordfish, flown by sub Lt Kingsmill, can claim to have had the most success, insofar as the TAG, Leading Airman 'Don' Bunce is credited with shooting down a German Fighter. Don was standing up firing his VIckers gun and after several bursts he looked down to where his seat should have been, only to see a gaping hole. In fact most of the fuselage was full of holes and tears. Suddenly through the mist Observer 'Mac' Samples caught a glimpse of a big ship which he identified as the Prinz Eugen. They continued over the battle fleet screen with a tremendous amount of flak coming up at them. It all seemed so unreal. The three aircrew watched the shells and bullets ripping throughwings and amazingly the Swordfish kept flying. Suddenly a cannon shell hit the fuselage immediately behind the Pilot and exploded, wounding both Pat Kingsmill and Mac Samples. Don Bunce saw that the Observer was covered in blood but as he was continuing to shout orders to the pilot to try to dodge the attacking aircraft, Don continued to fire his Vickers gun. Pat Kingsmill recalls: "The tracers came floating gently towards us and then whizzed past. There were more and more large splotches in the sea as aircraft and ships fired at us and their shells burst into the waves. We were really in it, when suddenly I felt a sharp pain in my shoulder and my foot went squelchy. Oddly enough I didn't feel any more pain and I managed to keep control of the plane. Mac had been hit in the legs at this point but luckily Don Bunce was unhurt". Whilst still concentrating on the Prinz Eugen, as the sea was rough Pat wondered whether the torpedo would run true. He chugged along at 50 feet but could not at first get lined up properly. He then turned back to make another run in against the intense flak sent up from the Destroyer screen. As he once again flew towards the Prinz Eugen, the German gun crews could be seen in their sleek black anti-flash overalls as they continued to fire everything they had at them. Mac felt a sudden burning sensation in his leg and when he looked down at his black flying boots he was astonished to see that in one there was a neat pattern which looked like button holes. He felt no pain but whilst gazing at his leg that had been drilled with holes, he did not notice that Pat had dropped his torpedo, aimed at the Prinz Eugen, from about 2,000 yards. As Pat's Swordfish, ripped and shaken by the flak, veered back once more over the destroyer screen a shell sliced off the tops of two or three cylinders which greatly reduced the engine power.

Losing height rapidly he pulled the stick back to bring the nose up to keep flying. With the fabric of the wings tattered with holes the plane could not maintain height and was gradually sinking towards the water when the engine burst into flames and the port wing caught fire. Don continued firing at the same time as screaming insults at the Germans. Pat tried to shout to Mac through the Gosport Tube, not realising that it had been shattered, to say that he was going to attempt to get back to base. Covered in blood Mac managed to climb up towards the pilot and shouted into his ear; "We'll never make it, ditch near those MTB's", and pointed in the direction of Pumphrey's boats, which were still in the area. Kingsmill's burning plane, with the engine shot to pieces, glided silently towards the sea. The crew saw the 2nd Vic of three Swordfish, led by Lt J C Thompson, approach the Prinz Eugen at about 100 feet. Pat Kingsmill, being unable to gain height, passed underneath them.

Thompson's Swordfish limped on, the fabric of the wings and fuselage now tattered and in ribbons and their crews wounded or dying. They still maintained a steady course and flew into the red and orange wall of exploding shells. One after another the Swordfish with their young aircrews were blown to pieces. Of these 9, only the body of Leading Airman William Granville-Smith was recovered. That was the last that anyone saw of those three planes.

As he watched the smoking wrecks falling into the sea, Captain Hoffmann of the Scharnhorst exclaimed; "Poor fellows. They are so very slow. It is nothing but suicide for them to fly against these big ships". Everyone on the bridges of the Battleships felt the same. Willhelm Wolf, on the Scharnhorst, said; "What an heroic stage for them to meet their end on. Behind them their homeland which they had just left with their hearts steeled to their purpose still in view".